We all know every writer started as a reader. Recently a writer friend of mine shared that the book she read in middle school that kicked off her interest in writing for children was E.B. White’s Charlotte’s Web. I agree that book is a serious favorite of mine too. I named my first two-wheel bike Charlotte after all. But for me, if I have to narrow down from all the books I read as a kid, (everything from To Kill A Mockingbird to Salem’s Lot) the one book that inspired me the most was Watership Down by Richard Adams.

The blurb from Sparknotes does not do this novel any favors:

Watership Down is the tale of a group of rabbits in search of a home. Fiver, a small, young rabbit, has a gift: He can tell when things are going to happen and he can sense whether they will be good or bad. Fiver foresees great danger to the rabbits’ home warren. 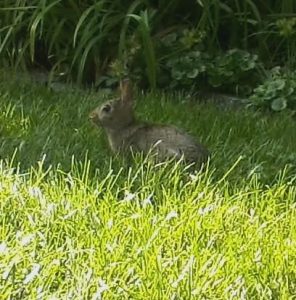 The book is So. Much. More. Maybe part of my affection stems from the fact that my favorite teacher in middle school passed along her personal copy to me, encouraging me to dive deep within its pages to find the story beneath the story. Shout out to Mrs. Monroe @Summit Hill Junior High for lighting the fire within this little girl. Honestly it took her a couple weeks of pestering for me to give this book a chance just because the back cover blurb was so lame.

Once I started, I couldn’t put it down. And so began my love of reading and writing stories that are more than what they seem on the surface, stories with nuance that warrant a second, and third reading.

Richard Adams wrote Watership Down in 1972. From his Amazon Author Page:

Richard George Adams (born 9 May, 1920) is an English novelist, author of Watership Down, Shardik, Maia, The Plague Dogs, Traveller, Tales from Watership Down and many other books.

He originally began telling the story of Watership Down to his two daughters during a long car journey, and they insisted he write it down. When Watership Down was finally published, after many rejections, it sold over a million copies in record time in both the United Kingdom and the United States. Watership Down has become a modern classic and won both the Carnegie Medal and the Guardian Children’s Fiction Prize in 1972. To date it has sold over 8 million copies and been translated into many languages, including Finnish, Hebrew and Chinese.

And yes, he’s still alive and kicking at 96 years old. [UPDATE Richard Adams passed away the day after Christmas, 2016 a mere three months after my original post. His obituary can be found http://www.bbc.com/news/entertainment-arts-38446309. RIP.] 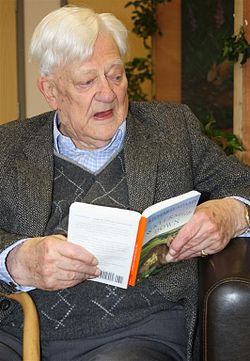 Adams reads from Watership Down at a 2008 exhibition of Aldo Galli paintings, Photo Credit https://en.wikipedia.org/wiki/Richard_Adams

One of my favorite interviews with him is from The Telegraph, originally published in 2014, in which he tells us that when his publisher accepted the manuscript (after rejections from seven other publishers) “This blew a trumpet in my heart.”
Great line, right? It’s the same feeling I get when a four or five star review for any of my work hits Goodreads!
Another of my favorite Adams quotes is from an interview with Alison Flood of The Guardian just last year, where he said, “I do not believe in talking down to children. Readers like to be upset, excited and bowled over.”
Nothing wrong with a little heart-pumping excitement or a good, cleansing cry while turning the pages of a book.
Which book started your author journey? Share in the comments!